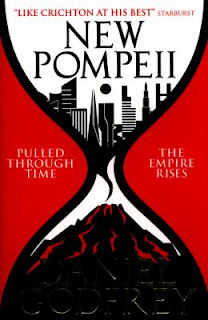 The science fiction/fantasy books I enjoy incorporate world building or time travel.  The New Pompeii by Daniel Godfrey is a bit of both. NovusPart, an energy giant has developed a new technology that can transport objects, and people  just before they die.  Of course before they accomplished this feat, some who thought they were safe had to die so they could perfect the technology.  One who doesn't die when she should have is Kirsten who is not sure what has happened or who is to blame.

Nick Houghton takes a job at NovusPart as an historical advisor.  In spite of his father's warnings about the company's ethics, he is excited by by the prospect of seeing how the Pompeians lived.  NovusPart has built a replica of Pompeii in Russia and transported Pompeians just before they are killed by the volcano from Mount Vesuvius. Nick walks among the citizens and begins to notice their angry and questioning looks.  He becomes uneasy as they seem to know he is not one of them and wonders what happened to his predecessor.  Do the Pompeians believe the outsiders when they are told why they cannot stray far from the compound? Of course not.  Integral to the plot is the belief on the part of NovusPart that the citizens they have imported are stupid.  A big mistake!  Exciting coliseum showdown involving saber tooth tigers!  And a big surprise starring Kirsten.  Can't wait for the sequel!